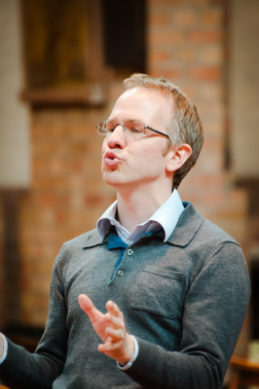 Duncan Aspden is a conductor, organist and continuo player. He studied at Jesus  College Cambridge and at the Royal Academy of Music. Starting out as an organist, he has held posts at four of England’s cathedrals, and is now Associate Director of Music at Farm Street Church in Mayfair, regularly directing and accompanying one of London’s leading professional church choirs.

Duncan is Director of Music of City of Oxford Choir and Musical Director of Thame Chamber Choir and of TCC2 their children’s choir. In 2012 he founded Excalibur Voices. With these and many other ensembles he performs a wide repertoire from unaccompanied miniatures to major oratorios with leading soloists and orchestras.

As a conductor and continuo player, Duncan has broadcast for BBC Radio and Television and has appeared in several early music festivals. He has directed ensembles including I Fagiolini, the London Mozart Players and The English Cornett and Sackbutt Ensemble, while his own period instrument ensemble Interplay has given numerous concerts in and around London.